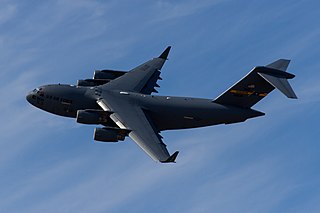 ACCOMMODATION: Normal flight crew of pilot and co-pilol, side by side on flight deck, plus a loadmastet in a station in the cargo hold. Provision for additional crew members if required for special missions. Access to flight deck via downward opening airstair door on port side of lower forward fuselage. Bunks for crew immediately aft of flight deck area; crew comfort station at forward end of cargo hold. Main cargo hold able 10 accommodate Army wheeled vehicles, including five-ton expandable vans in two rows, or three Jeeps side by side, or up to three AH-64A Apache attack helicopters, with straight-in loading via hydraulically actuated rear loading ramp which forms underside of rear fuselage when retracted. Alternatively, aircraft can be equipped as a troop transport, with rows of 27 stowable tip-up seats along each side wall and another 48 seats which can be erected along the centreline, or with litters for medical evacuation mission. Airdrop capability includes single platforms of up to 27,215 kg (60,000 lb), multiple platforms of up to 49,895 kg (110,000 lb), or up to 102 paratroops. Equipped tor low altitude parachute extraction system (LAPES) drops. The C-17A will be the only aircraft able to airdrop outsize firepower the size of the US Army's new infantry fighting vehicle; it will also be able to carry the M1 main battle tank in combination with other vehicles. The cargo handling system includes rails for airdrops and rails/rollers for normal cargo handling. Each row of rails/rollers can be converted quickly by a single loadmastet from one configuration to the other. Cargo tiedown rings, each stressed for 11,340 kg (25,000 lb) all over cargo floor at 61 cm (24 in) intervals. Three quick-erecting litter stanchions, each supporting four litters, permanently carried. Main access to cargo hold is via rear loading ramp, which is itself stressed for 18,145 kg (40,000 lb) of cargo. Underfuselage door aft of ramp moves upward inside fuselage to facilitate loading and unloading. Paratroop door at rear on each side; two ditching exits overhead, aft of the paratroop doors, and two overhead forward of the wing box.