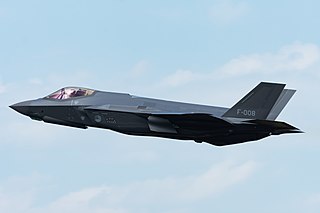 CUSTOMERS: Two X-35 demonstrators; initial planning called for some 3,000 F-35s for USA and UK, but US Navy and Marine Corps requirement cut significantly in 2003. UK confirmed on 30 September 2002 that F-35B (STOVL) version will be procured for both RAF and Royal Navy, with service introduction during 2012. Orders also expected from Australia (up to 100, possibly including some configured for long-range surveillance and reconnaissance), Canada, Denmark, Israel, Italy, Netherlands, Norway, Singapore and Turkey.

COSTS: At time of down select for SDD phase, unit cost of USAF F-35A quoted as US$37.3 million, with CV/STOVL versions costing under US$50 million each, US$3.41 billion SDD funding for FY03, following US$1.52 billion appropriation in FY02; requests for FY04 and FY05 are US$4.37 billion and US$4.47 billion respectively. Fly away costs mentioned in connection with Italian involvement quoted as US$36.6 million for CTOL version, US$47.4 million for CV version and US$45.3 million for STOVL version. UK purchase of 150 F-35Bs estimated to cost around UK £10 billion.

DESIGN FEATURES: Trapezoidal mid-wing configuration, optimised for low observability. Twin tailfins; internal weapon bays. Wing and tailplane leading-edges swept back approximately 33°; trailing-edges swept forward approximately 14°; fins swept back approximately 42° and canted outward at tips by approximately 25°. Twin 'divertless' fibre-placed graphite/epoxy composites engine air intakes with no moving parts produced by ATK. All-electric flight control system.
STOVL version employs a lifting fan behind the cockpit, driven by a shaft from the single engine; inlet and outlet are covered by doors, except when in use; original side-hinged bi-fold hatch of X-35B replaced in early 2003 by single-piece cantilever inlet door hinged at rear. Other changes related to thermal management also incorporated at this time, to satisfy requirement to operate on 49°C (120°F) day. The resultant cold air barrier prevents hot air from being reingested when on or near the ground.