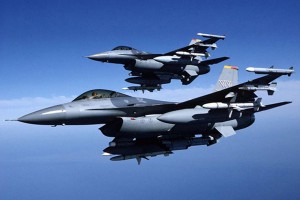 CUSTOMERS: Total 4,417 production aircraft ordered or requested by September 2003, including planned USAF procurement of 2,230 and 28 embargoed Pakistan Air Force examples that are to be distributed equally between the USAF and US Navy. Backlog of 327 aircraft at end of August 2003 ensures continued F-16 production through 2008.

COSTS: Approximately US$35 million, flyaway, depending on configuration. Sale of 48 aircraft to Poland valued at US$3.5 billion.

ACCOMMODATION: Pilot only in F-16C, in pressurised and air conditioned cockpit. Boeing (formerly McDonnell Douglas) ACES II zero/zero ejection seat. Bubble canopy made of polycarbonate advanced plastics material. Inside of USAF F-16C/D canopy coated with gold film to dissipate radar energy. In conjunction with radar-absorbing materials in air intake, this reduces frontal radar signature by 40 per cent. Windscreen and forward canopy are an integral unit without a forward bow frame, and are separated from the aft canopy by a simple support structure which serves also as the breakpoint where the forward section pivots upwaed and aft to give access to the cockpit. A redundant safety lock feature prevents canopy loss. Windscreen/canopy design provides 360o all-round view, 195o fore and aft, 40o down over the side, and 15o down over the nose.
To enable the pilot to sustain high g forces, and for pilot comfort, the seat is inclined 30o aft and the heel line is raised. In normal operation the canopy is pivoted upward and aft by electrical power, the pilot is also able to unlatch the canopy manually and open it with a back-up handcrank. Emergency jettison is provided by explosive unlatching devices and two rockets. A limited displacement, force-sensing control stick is provided on the right-hand console, with a suitable armrest, to provide precise control inputs during combat manoeuvres.
The F-16D has two cockpits in tandem, equipped with all controls, displays, instruments, avionics and life support systems required to perform both training and combat missions. The layout of the F-16D second station is similar to the F-16C, and is fully systems-operational. A single-enclosure polycarbonate transparency, made in two pieces and spliced aft of the forward seat with a metal bow frame and lateral support member, provides outstanding view from both cockpits.
Advanced Block 50/52 and Block 60 F-16Ds are configured with weapon system operator station in rear cockpit, plus a large dorsal equipment compartment extending from the rear of the canopy to the leading edge of the fin; compartment houses avionics unique to each operator, plus additional chaff/flare dispensers and an in-flight refuelling receptacle.