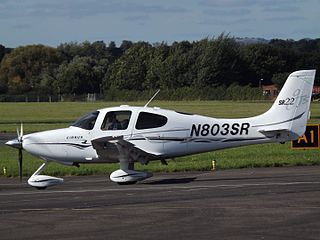 CUSTOMERS: Orders for 234 received by June 2001. Launch of SR22 saw approximately 20 per cent of SR20 customers upgrade to new model. Total of 124 delivered in 2001, 292 in 2002, and 221 in the first nine months of 2003. By December 2002, 399 had been registered. Recent customers include AirShares Elite of Atlanta, Georgia, which ordered 25, plus 25 options, on 8 April 2002, for its fractional ownership programme. SR22s have been delivered to customers in Australia, Canada, Europe, Mexico, New Zealand, South Africa and South America.

DESIGN FEATURES: As for SR20, but with fuselage-mounted vortex generator ahead of wingroots and wingtip extensions.

FLYING CONTROLS: As for SR20, but flight-adjustable rudder tab and ground-adjustable tab on port elevator.

ACCOMMODATION: As for SR20.