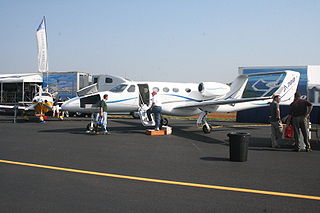 DESIGN FEATURES: Design draws on A500. Engines pylon-mounted at rear of fuselage.

FLYNG CONTROLS: As A500. Twin tabs in elevator and on one rudder. Two-section flaps (inboard and outboard of boom) on each wing.

ACCOMMODATION: One or two pilots in cockpit, plus four passengers in club seating in cabin, separated by divider and refreshment centre. Integral airstair on port side ahead of wing leading edge, with emergency exits on both sides of fuselage at centre of cabin. Lavatory fitted in aft of cabin. Baggage compartment in nose, forward of pressure bulkhead, accessible externally. Second baggage compartment at rear of cabin.