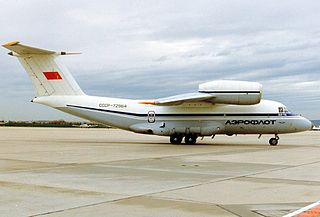 PROGRAMME: First of two prototype An-72s, built at Kiev, flew 31 August 1977; after eight pre-series aircraft, manufacture transferred to Kharkov; An-74 polar transport announced February 1984; over 150 An-72/74 aircraft have been built.

ACCOMMODATION: Pilot and co-pilot navigator side by side on flight deck of An-72, plus a flight engineer, with provision for a fourth person: pilot, co-pilot, navigator, radio operator and flight engineer in An-74. Heated windows. Two windscreen wipers. Flight deck and cabin pressurised and air-conditioned. Main cabin designed primarily for freight, including four UAK-2.5 containers or four PAV-2.5 pallets each weighing 2,500 kg (5,511 lb); but An-72 has folding seats for 68 passengers along side walls and on removable central seats. It can carry 57 parachutists, and has provision for 24 stretcher patients. 12 seated casualties and an attendant in ambulance configuration. An-74 is able to carry eight mission staff in combi role, in two rows of seats, with tables, and with two bunks installed, one on each side of cabin aft of seats. Bulged observation windows on port side for navigator and hydrologist. Provision for wardrobe and galley. Movable bulkhead between passenger and freight compartments, with provision for up to 1,500 kg (3,307 lb) of freight in rear compartment. Large downward hinged and forward sliding rear ramp door for loading trucks and tracked vehicles, and for direct loading of hold from trucks, as described under An-26 entry. It is openable in flight, enabling freight loads of up to 7,500 kg (16,535 lb), with a maximum of 2,500 kg (5,511 lb) per individual item, to be airdropped by parachute extraction system. Removable mobile winch, capacity 2,500 kg (5,511 lb), assists loading of containers up to 1.90 x 2.44 x 1.46 m (6 ft 3 in x 8 ft x 4 ft 9½ in) in size, pallets 1.90 x 2.42 x 1.46 m (6 ft 3 in x 7 ft 11 in x 4 ft 9½ in) in size, and other bulky items. Cargo straps and nets are stowed in lockers on each side of hold when not in use. Provision for huilding roller conveyors into floor. Main crew and passenger door at front of cabin on port side. Small emergency exit and servicing door at rear of cabin on starboard side.