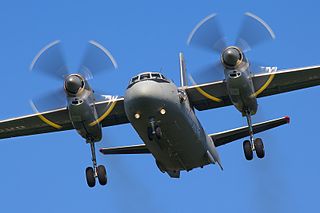 PROGRAMME: Prototype (SSSR-83966) first exhibited 1977 Paris Air Show; export deliveries to India began 1984. Since 1982, the aircraft has been in series production at the Kiev-based Aviant plant. There have been built more than 350 aircraft.

FLYING CONTROLS: As An-26 except for high-lift wings (see Design Features).

STRUCTURE: Generally as An-26.

ACCOMMODATION: Crew of three (pilot, co-pilot and navigator), with provision for flight engineer. Rear loading hatch and forward-sliding ramp dour, similar to those of An-26, plus winch and hoist with capacity ol 3,000 kg (6,615 lb) for freight handling. Cargo or vehicles can be airdropped by parachute, including extraction of large loads by drag parachute, with the aid of removable roller conveyors and guide rails on the floor of the hold. Payloads include 12 freight pallets, 50 passengers or 42 parachutists and a jumpmaster on a row of tip-up seats along each cabin wall, or 24 stretcher patients and up to three medical personnel.

SYSTEMS: Accommodation fully pressurised and air-conditioned. Systems basically as An-26 but generally improved.

AVIONICS: Basically as An-26.

EQUIPMENT: Basically as An-26.

ARMAMENT: Provision for four bomb racks, two on each side of the fuselage below the wings (fitted to aircraft for Peru).