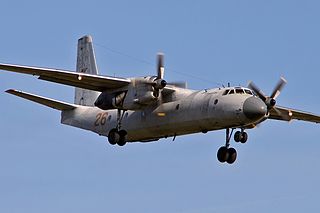 ACCOMMODATION: Basic crew of five (pilot, co-pilot, radio operator, flight engineer and navigator), with station at rear of cabin on starboard side for loading supervisor or load dispatcher. Optional domed observation window for navigator on port side of flight deck. Toilet on port side aft of flight deck; crew door, small galley and oxygen bottle stowage on starboard side. Emergency escape hatch in door immediately aft of flight deck. Large downward hinged rear ramp door, hinged to an anchorage mounted on tracks running forward under the blister fairings. This enables ramp/door to slide forward under fuselage for direct loading on to cabin floor or for airdropping of freight. When doing so, its rear is supported by the pivoted swinging arm on each side which also raises and lowers door in the alternative fixed-hinge mode. Door can be locked in any intermediate position. Electrically powered mobile winch, capacity 2,000 kg (4,409 lb), hoists crates through rear entrance and runs on a rail in the cabin ceiling to position payload in cabin. Electrically and manually operated conveyor, capacity 4,500 kg (9,920 lb), built-in flush with cabin floor of original An-26, facilitates loading and airdropping of freight. An-26B has removable rollgangs, mechanism for moving pallets inside hold, and moorings, enabling two men to load and unload three pallets in 30 mins. Rollgangs can be stowed against sides of cabin. Both versions can accommodate a variety of motor vehicles, including GAZ-69 and UAZ-469 military vehicles, or cargo items up to 1.50 m (59 in) high by 2.10 m (82.6 in) wide. Height of rear edge of cargo door surround above the cabin floor is 1.50 m (4 ft 11 in). Cabin is pressurised and air-conditioned, and can be fitted with a row of tip-up seats along each wall to accommodate a total of 38 to 40 persons. Conversion to troop transport role, or to an ambulance for 24 stretcher patients and a medical attendant, takes 20 to 30 min in the field.

ARMAMENT: Provision for bomb rack on fuselage below each wingroot trailing-edge.