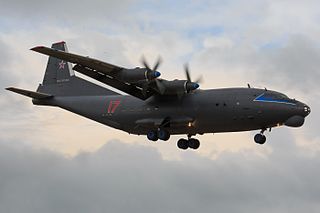 ACCOMMODATION: Pilot and co-pilot side by side on flight deck. Engineer's station on starboard side, behind co-pilot. Radio operator in well behind pilot, facing outward. Navigator in glazed nose compartment. Rear gunner in tail turret. Crew door on port side forward of wing. No integral rear loading ramp. Access to freight hold via large door under upswept rear fuselage, comprising two longitudinal halves which can be hinged upward inside cabin to provide access for direct loading of freight from trucks. Undersurface of fuselage aft of this door is formed by a further, rear-hinged, door which retracts upward into fuselage to facilitate loading and unloading. Equipped to carry 90 troops or 60 paratroops, all of whom can be despatched in under one minute, with rear door panels folded upward.