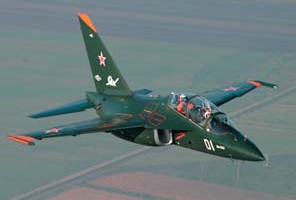 MISSION: The Yak-130 is designed for basic and advanced training of military flight school cadets, for retraining pilots to fly combat fighters in manoeuvre units, and as a light combat aircraft.
The Yak-130 trainer is one of the major components of the integrated flight training system, which comprises ground training assets, simulators, a basic training aircraft, and a training management system. All these components are combined by common open-architecture software allowing further build-up of the system’s capacities.
The Yak-130 trainer is capable of providing sufficient pilot training to fly any fourth- or fifthgeneration jet fighter, including the Su-30 and MiG-29 family aircraft, as well as Mirage 2000, F-15, F-16, Eurofighter Typhoon, F-22, and F-35 warplanes.
The Yak-130’s high versatility facilitates its integration into different national air forces, as far as its technical specifications and operational characteristics are concerned.

EQUIPMENT: The Yak-130 is fitted with a digital fly-by-wire system, which functions as an active flight safety system and allows the instructor to adjust stability and controllability parameters to those of the aircraft being simulated. The aircraft cockpits are equipped with electronic displays completely identical in layout to those of fifth-generation aircraft.
The aircraft can carry an integrated Osa or Kopyo radar, or an electro-optical station. If used jointly with the Pchela RPV, the Yak-130 can deliver standoff pinpoint strikes demonstrating increased combat efficiency, especially in mountainous areas.

ARMAMENT: Eight underwing pylons and one ventral pylon are used for carrying up to 3,000 kg of payload such as air-to-air and air-to-surface missiles, rockets, bombs, external fuel tanks, and specialised (weapon guidance, reconnaissance, ECM) pods. It is equipped with the refuelling probe considerably enhancing the aircraft combat capabilities.