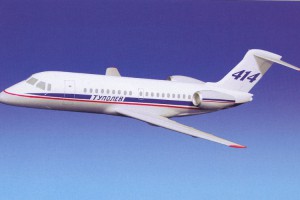 PROGRAMME: Announced at 1995 Paris Air Show; proposed manufacture by KAPO at Kazan, Tatarstan, from 2003. Specification revised 1996 and further refined in 1997 when governments of Russia and Tatarstan agreed on 20 August to 50:50 sharing of development costs, to which latter had contributed some US$70 million by late 2002. Tatarstan placed symbolic first order for a presidential transport (since superseded by Tu-214 VSSN, which see). Mockup completed by late 1997; technical documentation issued 2000. Both versions entered for 2002-03 national RRJ competition staged by Rosaviacosmos and eventually won by Sukhoi. Tupolev and KAPO plan to continue development provided non-federal funding can be found; however, reported in March 2003 that Tu-324 had by then been allocated some US$38 million in state funding. Further investment of US$70 million by Tatarstan government reported in July 2003, coupled with statement that prototype manufacture was about to begin. Five prototypes planned; certification targeted for 2005. Is first Russian aircraft programme designed entirely with use of computers.

DESIGN FEATURES: Wings scaled down from Tu-204; illustrations show the aircraft with and without winglets.