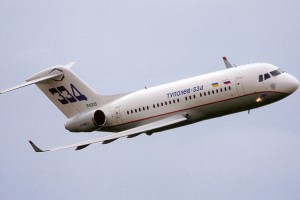 PROGRAMME: Launched 1986, with target first flight in 1991 and service entry in 1995; chief designer Igor Kaligin. First prototype Tu-334 (RA-94001) eventually rolled out at Zhukovsky during Moscow Air Show, 25 August 1995; then scheduled to fly 1996 with D-436T1 engines, but delayed by funding shortages. Refinancing by Ukrainian government in early 1997 resulted in new target date of May/June 1997 for first Tu-334s built by Aviant at Kiev; this also missed; second and third identical, but non-flying, prototypes under construction at Zhukovsky by 1996; second used for static tests at CAHI (TsAGI) 1996; unidentified test airframe delivered to Aviatest LNK at Riga from Kiev in mid-2000 to simulate 20 year fatigue life; further two prototypes and three production aircraft under construction at Kiev by early 1999 (three for full assembly by Aviant; part of fuselage and wings of other two for delivery to RSK 'MiG' at Lukhovitsy). RA-94001 eventually flown 8 February 1999 and had achieved eight sorties by time of public debut at Moscow in August 1999. Plans for 200 flights in 2001 not achieved (114 only), and total of only some 180 hours in 144 flights logged by April 2002. Only about one-quarter of planned 900 test and certification flights achieved by mid-2003, at which time second flying prototype (Aviant-built 005) said to be more than 90 per cent complete; was rolled out 2 August 2003 and scheduled to make maiden flight in late September. Completion of third development aircraft (003, first by RSK 'MIG'), anticipated by June 2003, has also slipped, but hoped to be achieved in fourth quarter of 2003.
AP-25/FAR Pt 25 certification programme was due for completion in 2001, but victim of above-mentioned delays, created by erratic funding and delayed delivery of D-436 engines; certification and deliveries now seen as unlikely before 2004 at earliest. TANTK at Taganrog was to have been second source for -100, but Russian government decree of 5 October 1999 nominated RSK 'MiG' (which is to contribute half of certification costs, first payment being made in January 2002); first Taganrog fuselage transported to Voronin Production Centre, Moscow, arriving 7 April 2000. Completion and final assembly was to have been in second quarter of 2001, but this not achieved (see above); Taganrog horizontal tail delivered early 2002. Half of all assemblies and components for RSK 'MiG' production to be supplied by Aviant; other components supplied by Kazan and Ulyanovsk factories.
On 16 June 1997 Rolls-Royce Deutschland agreed loan of BR710 engines to build prototype of Tu-334-120; first flight of -120 had been expected late 1998, but delayed by funding shortages. Revised plans for BR710s to go into -100 prototype, after short test programme with D-436s, also thwarted by aircraft's continued grounding. R-R support now directed at versions powered by BR715 engines.
During mid-1997, AIO of Iran showed interest in establishing a kit assembly line at Esfahan for 100 Tu-334s over 15 years. Negotiations still proceeding in 2002, based on eventual fuselage detailed assembly in Iran, with complete wings from Ukraine and empennage from Russia; peak production of 12 per year envisaged.

CUSTOMERS: Provisional orders in 1995 for approximately 40 aircraft, for Rossiya Airlines, Bashkiri Airlines, Tyumen Airlines and Tatarstan Airlines; total increased to 300 from 24 airlines by 2003. MoU for 20 Tu-334-120s signed by Aeroflot in June 2000; other letters of intent from Atlant Soyuz (two) and Pulkovo (15 to 20) during first half of 2002. First firm orders (five Tu-334-100s each for Aerofraht and Atlant Soyuz Airlines) announced by RSK 'MiG' at MAKS air show, August 2003; deliveries, to latter, to begin in 2005. CIS market estimated as about 350 by Rosavaikosmos; by 1999. Iranian airlines committed to purchase 50 from local assembly.

DESIGN FEATURES: Replacement for Tu-134 and Yak-42, to meet requirements of Russian Federation and Associated States (CIS) airlines. Wings have much in common with those of Tu-204 and the fuselage is shortened version of Tu-204, with identical flight deck. Configuration is all-swept low/mid-wing, with rear-mounted engines and T tail; circular-section semi-monocoque fuselage; wings have dihedral from roots. Short-stroke landing gear for minimal door sill height, to facilitate baggage handling at airports with limited loading capabilities. Service life 60,000 hours.
Wings have supercritical section, 24 o sweepback, with winglets.

STRUCTURE: Composites and other lightweight materials make up 20 per cent of structure by weight. Metal alloy wing, fin and horizontal tail, each constructed on two spars, have composites leading-edges and covered by milled panels. Elevators, ailerons, airbrakes, spoilers, flaps, rudder and floor panels of composites honeycomb. Fuselage of metal alloy with riveted skin. Final assembly at Aviant (Ukraine) and RSK 'MiG' at Lukhovitsy.

ACCOMMODATION (Tu-334-100 and -120): Crew of two (optionally three) on 'Tu-204 compliant' flight deck; provision for fourth seat for instructor or observer. Three basic single-aisle passenger arrangements: (1) 72 seats, with 12 seats four-abreast in first class cabin at front, at pitch of 102 cm (40 in) and with 73 cm (28.75 in) aisle, and 60 tourist class seats six-abreast at 81 cm (32 in) pitch with 49.5 cm (19.5 in) aisle; (2) 102 seats, all tourist, at 81 cm (32 in) pitch; and (3) 74 seats, with eight business class and 66 in economy class. All three configurations have buffet/galley, coat compartment and lavatory immediately behind flight deck, a further lavatory and service compartment at rear; 72-seater has additional galleys at front and rear; overhead stowage for hand baggage. Other arrangements at customer's option. Passenger doors at front and rear of cabin on port side; service doors opposite. Underfloor baggage/freight holds; doors on starboard side.