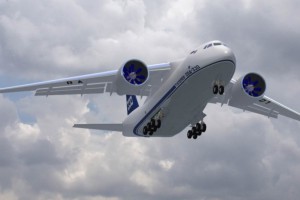 PROGRAMME: Announced early 1993 as replacement for Antonov An-12; government support announced April 1994; first 10 to be built at Kazan; first flight scheduled 1997, for service from 1998; neither target achieved. Production at both KAPO and Samara. Stated by commander of Russian Military Transport Aviation to be one of three basic types to be operated by his force in 21st century. Production drawings released by Tupolev to KAPO at Kazan in late 1997 and construction then begun. By early 2000 the venture was being offered as a potential partnership.
Tu-330 included in federal plans for civil aviation up to 2015, requiring investment of equivalent of US$340 million over seven years. Tupolev expenditure to early 2000 totalled Rb80 million. Kazan plant hoped for production launch in 2002, but funding still awaited in mid-2003. However, Russian Air Forces' reluctance to accept An-70 seen to improve Tu-330's chances of go-ahead, and named in 2003 as one of two main contenders (with Il-214) to replace An-12.

POWER PLANT: Two Aviadvigatel PS-90A turbofans. Rolls-Royce and Pratt & Whitney turbofans under consideration for export sales. Tu-330K is projected for LNG transportation, with three tanks in the cabin for 22,800 kg (50,265 lb) of LNG.