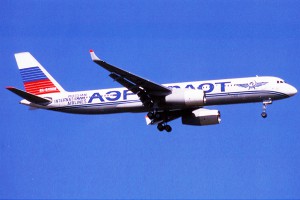 MISSION: The family of medium-haul airliners powered by two PS-90A 16,000-kgf turbofan engines or by their foreign-made analogues. The base aircraft is the Tu-204 that is designed to carry 214 passengers at distance of 4,900 km at a speed of 850 km/h. The maiden flight was made on 2 January, 1989. The series production of the airliner was set up at the Aviastar plant (Ulyanovsk) in 1990. The Tu-214 version has been built at the Kazan-based Gorbunov aircraft production association since 1994. As of 2003, there have been built over 30 airliners of all variants, which are currently flown by Russian and Egyptian carriers.