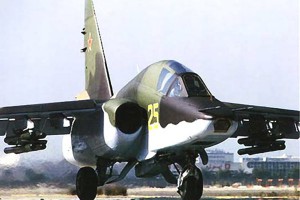 MISSION: The Su-39 aircraft, equipped with Kopyo radar is a profound upgrading of the baseline Su-25 ground attack airplane. It is intended specifically for counteraction to small-size, wellprotected targets (including new-generation NATO tanks), by day and night in all weather conditions. The onboard SUV-25T Voskhod weapons control system is designed to identify and automatically track mobile small-size targets (tanks, vehicles, boats, etc.), provide target designation and automatic missile guidance and control for missile/gun/rocket. The Shkval-M optical-TV sighting system performs target search and identification in the scanning mode. Automated navigation and target attack procedures enable a group of Su-39s to strictly maintain prescribed time intervals, and, as a result, a wellcoordinated group attack from different directions. The Su-39 automatically flies to the target area, and its pre-directed TV system is activated 10-12 km away from the target. The pilot monitors automatic target selection, lock-on, and switching to the autotracking mode. After the first target run the aircraft can either automatically complete a second run or return to home base, if the pilot so decides (manual control can be resumed only before landing). Another novelty in the aircraft’s avionics is the pod-mounted Kopyo-25 radar. The navigation system is supplemented with the A-737 satellite navigation unit, which enables automatic target acquisition with up to 15m position accuracy regardless of the distance to the target. The upgraded EW system comprises both built-in equipment and externally-mounted pods. The airplane’s protection has also been increased: the total weight of onboard survivability assets amounts to 1,115 kg. A pressurised cockpit offers an increase in the maximum combat altitude to 12,000 m from the baseline aircraft’s 7,000 m.