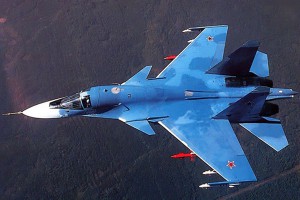 EQUIPMENT: The avionics suite ensures highly automated mission accomplishment in the entire range of operating conditions. It incorporates a phasedarray radar that detects air targets with cross section of 3 sq meters at a range of at least 120 km. Thus, providing up to 10 targets tracked simultaneously and up to 4 – engaged at a time. Whereas the ground (surface) target acquisition range is from 30 to 100 km. The avionics system also includes a laser-TV station and a powerful automated ECM system. The two-seat sideby- side arrangement provides a direct contact between crew's members and avoids duplication of controls and instruments. Modern instrumentation and comfortable cockpit conditions significantly facilitate crew's operation in duration flights. The air conditioning system allows crew members to operate in cockpit without oxygen masks up to an altitude of 10 km. There is a rest area inside deep fuselage section aft of cockpit, where crew's members can stand up to their full height, take food, etc.