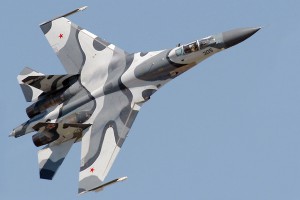 CUSTOMERS: Approximately 567 in service by December 1999. About 395 in service with Russian Air Forces (or 340 plus 10 with training units by mid-2000, according to some sources); these reports refer to active inventory; evidence suggests that main production batches for former USSR contained up to 600 Su-27s and 140 Su-27UBs.
China received 26 (24 Su-27SK single-seat, two Su-27UBK two-seat) in 1991-92, followed by 24 more (14 single-seat, 10 two-seat) in 1995-96; original agreements called for licensed manufacture of 200 as J-11, at planned rate of 50 a year, in new purpose-built factory (owned by Shenyang Aircraft Company) from 1998 (when first shipsets delivered from Komsomolsk; first Chinese-assembled Su-27 rolled out December 1998; only eight delivered by late 2000, following considerable quality control problems, leading to the procurement of 28 extra Russian-built Su-27UBKs, delivered 2000-02, first four on 14 December 2000, second four in December 2000; to Nanjing/Yuxikou air base, where 10 supplied in 2001 and balance of 10 following in 2002. China's licence agreement does not allow exports. The first 50 aircraft are being assembled from Russian-supplied kits of diminishing completeness and the Chinese aircraft will always include at least 30 per cent Komsomolsk content; first 10 kits stated to have been 100 per cent complete but, by 2000, China seeking more in this state to expedite deliveries. No licence has been granted for Chinese production of the AL-31 engine. China's 50 Su-27s were initially based at Wuhan, with the 9th Fighter Regiment, 3rd Air Division though 24 subsequently moved to Liancheng, where 17 were damaged (three beyond repair) in an April 1997 hurricane. Two more were written off in accidents. Production will now cease after 80 J-11s, there after switching to the Su-30MKK.
Vietnam has first batch of about six (including one Su-27UB, although further two UBs delivered by airfreight on 1 December 1997 and second pair, representing balance of follow-on order, destroyed in An-124 crash six days later, but replaced by 'Su-30s'); second batch of six now delivered, bringing in-service total to seven Su-27SKs and five Su-27UBK/Su-30Ks; 24 more on order. Upgrade expected, since Vietnam requires aircraft to use R-77 AAMs, Kh-29, Kh-31 and Kh-59 ASMs. Kazakhstan is receiving 32 from Russia, most recently six in 1997, four in January 1999 and four during 2000 (with 12 then outstanding), as compensation for return of Tu-95s and for alleged environmental and ecological damage. Belarus has 22 or 23 (though these may have been sold-on, perhaps to Angola); Ukraine 66 to 70 and Uzbekistan 30; others reportedly went to Armenia, Azerbaijan and Georgia; Syria has requested 14 (some reports suggest 17 in service others that only four were in service by mid-2000, two at Minkah AB and two at Damascus).
Ethiopia received the first of eight second-hand from Russia in late 1998 and Yemen is negotiating for 'a squadron'. In late 1999, there were reports that Angola had taken delivery of eight Su-27s at Catumbela in August, with the balance of seven expected immiuently. Pilots had reportedly trained in Belarus, the presumed source of the aircraft, though technical support came from Ukraine. Indonesia announced in March 2003 that two Su-27s and two Su-35s would be purchased immediately as prelude to acquisition of total of 48 'Flanker' versions over following four years. Japan has been reported to be interested in two aircraft for evaluation/aggressor use, but Sukhoi unwilling to sell less than six. Two Japanese pilots underwent a US$300,000 46-day training programme on the Su-27 in early 1998, however. More recently Malaysia was reportedly 'considering' an Su-27 purchase, while the aircraft was also offered to New Zealand as an alternative to its intended second-hand F-16 buy. Sukhoi offered an Su-30 10-year lease, with targeting pods, PGMs and support, for a quoted cost of NZ$124.8 million (US$68.8 million). On 26 November 1995, the first of two Su-27s was delivered to the USA inside an An-124 for an unknown purpose, believed to be support of military training exercises.

POWER PLANT: Two Saturn/Lyulka AL-31F turbofans, each 122.6 kN (27,577 lb st) with afterburning. Large spring-loaded auxiliary air intake louvres in bottom of each three-ramp engine duct near primary wedge intake; two rows of small vertical louvres in each sidewall of wedge, and others in top face; fine grille of titanium hinges up from bottom of each duct to shield engine from foreign object ingestion during take-off and landing.
Fuel in four integral tanks: three in fuselage and one split between each outer wing. Max internal fuel capacity approximately 11,775 litres (3,110 US gallons; 2,590 Imp gallons); normal operational fuel load 6,600 litres (1,744 US gallons; 1,452 Imp gallons). Higher figure represents internal auxiliary tank for missions in which manoeuvrability not important. No provision for external fuel tanks, except in versions where specifically indicated. Pressure or gravity fuelling. Flight refuelling capability optional; Su-27UB operated as buddy tanker during development of system.