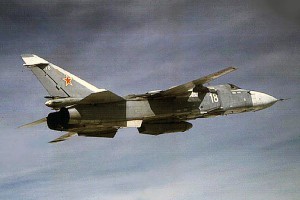 DESCRIPTION: A twin-seat supersonic swing-wing frontline bomber fitted with the Tigr navigation/ weapons control system and a wide range of guided and nonguided air-to-ground weapons. The aircraft was derived from the Su- 24 bomber fitted with the Puma sight/navigation system produced during 1971-1983. The Su-24 swing-wing prototype made its maiden flight on 17 January, 1970, the Su-24M prototype – on 29 June, 1977. The Su-24Ms had been series-produced at the Novosibirsk-based NAPO plant during 1979-1983. A total of about 1,400 aircraft of all versions was produced. The Su-24 was used as the base for deriving the following versions: the Su-24MR air reconnaissance frontline aircraft (1980), Su-24MP ECM aircraft (1980); Su-24MK frontline bomber export version (1987) which was exported to Algeria, Iraq, Libya and Syria. Presently, the Su-24M is the mainstay of the Russian Air Force tactical bomber fleet. The aircraft also is operated by naval strike air regiments of the Russian Navy’s air branch. 2001 witnessed the commencement of a Su-24 upgrade programme for the Russian Air Force, under which the bombers are going to be retrofitted with advanced avionics to enhance navigation accuracy and reducing sighting errors.