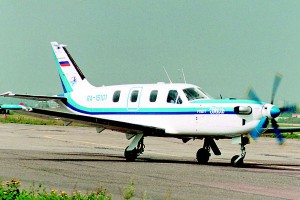 DESCRIPTION: The aircraft is intended to comfortably carry 4-6 passengers at a range of over 1,000 km at an average speed of 500 km/h at an altitude of 6-8 km. The Gzhel’s production was commenced at the Sokol plant (Nizhny Novgorod). The M-101T’s maiden flight was made on 31 March, 1995. As of 2003, two planes had been built for static tests, another two had been manufactured as flying prototypes and yet another six planes make up a pre-production batch. Two planes were operationally evaluated by the Phoenix air company, one aircraft in 1999-2000 underwent its opeval with the Central African Airlines company. M-101T was certified under AP-23 standards on 30 December 2002. The Sokol aircraft plant launched production of a 15-ship batch.