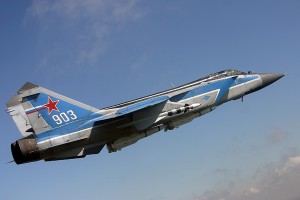 MISSION: The MiG-31E interceptor aircraft is designed to intercept and destroy air targets at low and high altitudes, in the forward and aft hemispheres, both in the lookup and lookdown modes, in all weather conditions, despite target manoeuvring and active/passive ECM. The aircraft can operate alone or within a group in the continuous or discrete field of control and guidance commands. It is capable of semiautonomous or fully autonomous operations against manoeuvring and ECM-protected targets. The MiG-31E is designed for employment as part of the nation’s air defence system. It is capable of long-endurance patrolling and engaging any airborne threats, including cruise missiles, helicopters and highaltitude reconnaissance aircraft. The MiG-31E can interoperate with various aircraft and provide target designation for up to three fighters, such as the MiG-21-93, MiG-23, MiG-25, MiG-29, and Su-27, and mask their attack.

EQUIPMENT: The MiG-31E weapons control system is built around a phased array radar. It can simultaneously track up to 10 air targets and attack up to four. The surveillance, tracking and attack envelope is limited by ± 70 deg in azimuth and +70…-60 deg in elevation. The radar can detect a target with a 19 sq.m radar cross section at 200 km.
The WCS also includes an IR system providing concealed target acquisition and designation, and operation in severe ECM environment.
The aircraft provides excellent interoperability within a group owing to the onboard radar and data transmission equipment ensuring automatic data exchange between four interceptors at a range of up to 200 km. The group leader assigns targets to his wingmen. A group of four MiG-31Es is capable of controlling an 800-900km-long frontline.
The aircraft features EW assets operating both in the radar and IR frequency bands.

ARMAMENT: The basic MiG-31E weapons mix includes four R-33E long-range missiles carried on a semi-recessed pylon under the fuselage, and R-40TD-1 and R-60MK missiles under the wing. The aircraft also has one GSh-6-23M six-barrel gun with the 260-round ammunition allowance.