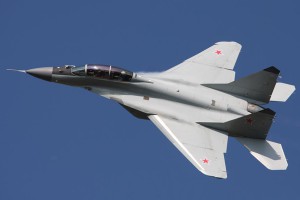 MISSION: The MiG-29 light tactical fighter is designed to intercept and defeat air targets day and night under normal and adverse weather conditions in free air space and against ground surface in natural clutter and ECM environment, using airto- air missiles with semi-active radar/IR seekers, as well as to destroy ground targets with unguided weapons in conditions of visual flight rules. It operates over friendly territory and in the near-operative and tactical zones of the enemy.
The aircraft features high combat effectiveness, outstanding maneuverability, high reliability and flight safety, and easy operation.
The MiG-29 and MiG-29UB aircraft are baseline models for upgrades of varied complexity, including the MiG-29SE, MiG-29SMT, MiG-29M, MiG-29M2, MiG-29K, MiG-29K2, MiG-29UBT modifications.
The aircraft has its air intakes closed to prevent foreign object damage of engines when moving on the ground, especially on poorly organized airfields and aprons.

EQUIPMENT: The weapons control system consists of a radar targeting system with the N-019 radar and an electro-optical targeting/navigation system with an air target acquisition, lock-on and tracking optical locating system including an IR search-and-track system and a laser rangefinder, as well as a helmet-mounted target designation system.
A unique avionic system has been created thanks to the radar, optical locator and helmetmounted sight data fusion and algorithms integration. Data exchange between the optical locator and radar has helped to notably enhance noise immunity of the aircraft targeting system as a whole. The MiG-29 helmetmounted target designation system is used for quick locking-on to air targets visually detected by the pilot through the cockpit glass allowing him to designate a target within one second to the radar, optical locating station or directly to the missile seeker, with an accuracy adequate enough for effective weapons employment.

ARMAMENT: The aircraft weapons include the GSh-301 built-in gun, as well as the R-27R1 and R-73E air-to-air guided missiles, rockets and bombs suspended under six external stores hardpoints.

VARIANTS: The MiG-29UB is designed for instructing and training pilots to fly the aircraft, intercept air targets and engage air and ground targets within the MiG-29’s altitude/airspeed combat envelope. It can also perform separate combat missions autonomously and within a MiG-29s group.
The MiG-29UB differs from the combat fighter mainly by its two-seat cockpit, absence of the targeting radar and R-27R1 guided missiles.
The aircraft and its engines, flight-navigation system, armaments, communication aids and in-cockpit warning systems can be managed from both cockpits. The instructor’s cockpit accommodates a failures simulation console and a switching console to imitate operation of the radar targeting system during air target interceptions with simulated R-27R1 missiles.
An interactive training system and simulators are used for on-ground formation of the flying and technical personnel.