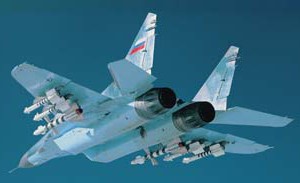 MISSION: The MiG-29SE light tactical fighter is designed for engagement of air targets, as well as ground and maritime targets. The fighter features high combat effectiveness, outstanding maneuverability, high reliability, and flight safety. The MIG-29SE is simple and economical in operation, being maintained on condition. It has an increased flight life in excess of 3,000 flying hours and a service life of 30 years with possible prolongation.

EQUIPMENT: The aircraft is equipped with the integrated weapons control system including the NO19- ME upgraded radar ensuring multiple target engagement with the RVV-AE air-to-air missiles, optical locating station, and helmet-mounted target designation system. The aircraft is fitted with an in-flight refuelling system allowing it to receive fuel from both Russian and foreign air tankers. An interactive training system, simulators and the MiG-29UB aircraft are used for onground formation of the flying and technical personnel. The aircraft can be equipped and armed with systems and munitions of foreign origin.