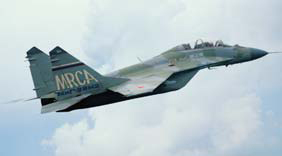 MISSION: The MiG-29M/M2 multirole fighter is designed to defeat air and ground/surface targets by day and night in fair and adverse weather conditions, and in complex jamming environment. The aircraft features high combat effectiveness, outstanding flight performance characteristics, and easy operation. Thanks to a second crewmember (on M2 version), certain combat missions, especially attacks against ground targets, operations within a group of MiG-29s, operations in jamming conditions, can be accomplished more effectively. The aircraft is equipped with an in-flight refuelling system. The MiG-29M aircraft is a new-generation MiG-29. It differs from the latest MiG-29SMT upgrade by the increased internal fuel load, upgraded engine with increased thrust and smokeless combustion chamber, digital multichannel fly-by-wire control system, stores stations number increased to 8. The aircraft has a reinforced landing gear. Its flight life and service life are also increased to 6,000 flying hours and 40 years correspondingly. The aircraft is maintained on condition. The MIG-29M/M2 fighter is unified with the MiG-29K/KUB by 95%.

EQUIPMENT: The MiG-29M/M2 avionics suite has an open architecture based on the MIL-STD-1553B multiplexing bus enabling integration of the onboard equipment and weapon systems of both Russian and foreign origins at customer request. The MiG-29M aircraft is equipped with the advanced weapons control system including the new Zhuk-M multi-function radar with enhanced operational range, multi-channel fire capability and modern air-to-ground modes of operation. The optical locating station and helmet-mounted targeting system make the avionic suite of the aircraft functionally complete. Integration of the targeting and navigational equipment on the basis of the modern computing system has helped to notably increase target acquisition range and sighting angles, as well as the number of targets simultaneously engaged (up to four).