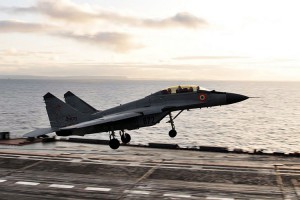 MISSION: The MiG-29К/KUB ship-borne multirole fighter is designed to perform naval groupings’ air defence tasks, to gain air superiority, to engage surface and ground (coastal) targets, including small-size ones, with precision-guided weapons, by day and night, in any weather conditions. The fighter is optimized for basing on aircraft carriers of medium displacement. The MiG-29K fighter is a new-generation MiG-29. It differs from the latest MiG-29SMT upgrade by increased internal fuel load, upgraded engine with increased thrust and smokeless combustion chamber, digital multi-channel flyby- wire control system, and stores stations number increased to 8. For operations on the aircraft carrier the aircraft has an arrester hook and a reinforced landing gear. Its flight life and service life are also increased – to 6,000 flying hours and 30-40 years correspondingly. The aircraft is maintained on condition.

EQUIPMENT: The aircraft has an open-architecture avionics suite based on the MIL-STD-1553B multiplexing bus enabling integration of onboard equipment and weapon systems of Russian and foreign origins at customer requests. The MiG-29K aircraft is equipped with the modern weapons control system including the Zhuk-ME new multifunctional radar with enhanced operational range, multi-channel fire capability and modern air-to-ground modes of operation. The optical locating station and helmet- mounted targeting system make the avionic suite of the aircraft functionally complete. Integration of the targeting and navigational equipment on the basis of the modern computing system has resulted in much greater target acquisition range and sighting angles while the number of targets simultaneously engaged is increased to four.

VARIANTS: The MiG-29KUB ship-borne combat trainer is designed for naval aviation pilots’ training and mastering flying skills, monitoring their techniques of flight management, navigation and combat employment, as well as pilot transition to the MIG-29K aircraft. In terms of its combat mission, the MiG-29KUB performs the entire scope of MiG-29K assigned combat tasks.
The MiG-29KUB has a high degree of design commonality with the MiG-29K aircraft. It is also equipped with the Zhuk-ME airborne radar and carries the same weapons mix.The aircraft can be a baseline model for creation of reconnaissance, target designation, electronic countermeasures, and flight refuelling modifications.
The MiG-29К and MiG-29KUB aircraft have an integral in-flight refuelling system and are equipped with the UPAZ suspended universal refueling unit providing for in-flight refuelling of both internal and external fuel tanks.
An interactive training system and simulators are used for on-ground formation of the flying and technical personnel.