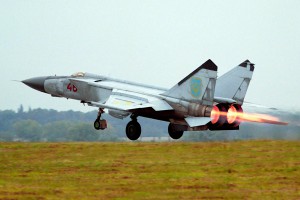 Production/Prototype Quantities - Approx. 700 MiG-25s of all variants have been built. Production now has ended.

Cockpit - Interceptors are single-seat and equipped w/a KM-1 ejection seat w/zero height/93 mph (150 km/h) capability. It is assumed that the trainer derivative is similarly equipped. On the single-seat aircraft, the single-piece canopy is hinged to the right. The windscreen is a three-piece design primarily of glass. The cockpit is pressurized and airconditioned and the control system is conventional stick and rudder. All instrumentation is analogue and there are select vertical displays. The radar scope on radar-equipped aircraft (i.e. all but the trainer) is offset to the right side of the instrument panel. Miscellaneous equipment includes an RSB-70/RPS HF radio; an RSIU-5 VHF radio: and R-831 UHF radio; and an ARK-15 radio compass.

Fuselage - Primarily welded steel and titanium construction materials of otherwise conventional semi-monococque stressed-skin design. High-heat-sink areas, such as wing leading edges, empennage (from engine heat), intake lips. etc.. are primarily of titanium w/almost all other structure of steel w/aluminum where appropriate. Fuselage is generally circular in cross-section w/intakes of rectangular cross section. Hydraulically-actuated airbrakes are mounted both on top of and underneath the fuselage.

Landing Gear - The tricycle landing gear is conventional in both appearance and design. Retraction of all three units is in forward direction. Retraction and extension are hydraulically actuated. Nose gear tires have a dimension of 25.6 in. (65 cm.) dia.; main gear tires of 47.25 in. (1.2 m.) dia. Main gear track is 23 ft. 1 in. (7.20 m.). There is a compartment for a dual-canopy drag chute located on the aft end of the empennage, between the vertical tail surfaces. It is pneumatically deployed.