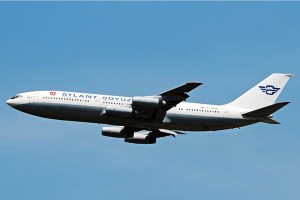 DESCRIPTION: The maiden flight made on 22 December, 1976. It had been under series production at the Voronezh aircraft plant during 1977-1997. 103 aircraft were built.
Type certificate was issued on 24 December 1980. 73 Il-86 aircraft were in operation in 2003 in Russia. Three aircraft were exported to China, with several more airliners leased to a number of other countries. Since 1987, the aircraft have been powered by NK-86A upgraded engines. The following versions have been derived from the Il-86 baseline aircraft – a troop-carrying airlifter (one was built) and an airborne command post Il-80 (four were built).