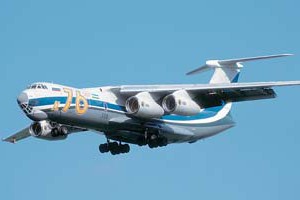 MISSION: The IL-76MD and IL-76MF aircraft are designed to airdrop troops, transport ground forces and materiel (including medium-weight tanks) with crews, deliver urgent cargos to troops, and transport casualties.

VARIANTS: The IL-76MD is capable of airlanding combat materiel (with crews), cargoes, or fuel in special tanks in the pressurised cargo hold. The twindeck version of the aircraft is capable of accommodating 225 personnel (145 people - without the second deck). Its medevac modification can evacuate 114 casualties. The IL-76MF is a derivative of the IL-76MD, with a new engine control system. The communications instrument panels and controls have been rearranged to enable flights without the radio operator. The crew has been cut down to four people - two pilots, navigator, and flight engineer. The aircraft avionics ensure airdropping by day and night, in good and adverse weather, in hostile air defence environment. The avionics include navigation/targeting system, longrange navigation system, satellite navigation system (on customer request), radio communications equipment, mid-air collision avoidance system, and flight data recorder. The aircraft can carry four UAK-10 or nine UAK-5 aircraft containers, or four UUK-20 ground/sea containers. The IL-76MF is capable of transporting up to 305 persons (in the twin-deck version), or 150 casualties, or military hardware with crews, or fuel in special containers, as well as airdropping troops (186 persons), materiel and cargoes. Both aircraft can be operated from soil airfields, and are superior to foreign counterparts in terms of cargo hold volume and autonomous operation capability.