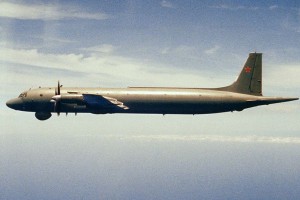 DESCRIPTION: The Il-38 is a medium-range antisubmarine warfare aircraft fitted with the Berkut ASW system and powered by four AI-20M 4,250-hp turboprop engines. The aircraft was derived from the Il-18D airliner, with its maiden flight made on 27 September, 1961. It was in production between 1965 and 1972 at the Moscow-based Znamya Truda Machine-building Plant (nowadays MiG Aircraft Corporation’s Voronin Production Centre). A total of about 60 aircraft were built, of which five were exported to India for the Indian Navy. Since 1968, the Il-38 has been in service with the Soviet (now Russian) Navy. 2001 saw the manufacture of the first upgraded Il-38N patrol aircraft boasting a novel avionics suite for Naval aviation of the Russian Federation. In 2002 Ilyushin started modernisation of Il-38 aircraft for the Indian Navy. The first flight of upgraded aircraft took place in Moscow on 3 July, 2003.