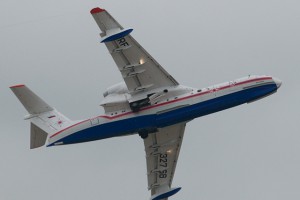 MISSION: The Be-200 amphibious arcraft is designed to fight forest fires, to transport passengers and cargoes, to carry out SAR operations.

EQUIPMENT: The aircraft’s integrated flight navigation and communications systems enable operations by day and night, in any weather conditions, and in any season. The aircraft can be flown from sea and internal water strips at least two metres deep.

VARIANTS: The Be-200 fire-fighting version is designed to dump water on fire sites from the onboard tanks. The tanks are emptied simultaneously, or one by one in a crew-selected sequence. Given an airfield-to-fire range of 100 km and an airfield- to-reservoir range of 10 km, the Be-200 is capable of delivering up to 270 tons of water to the fire zone without refuelling. Its high climb rate is a most valuable characteristic for firefighting in mountainous terrain and water scooping/dumping near obstacles, such as trees or hills.
If fitted with special dispersers, the Be-200 can also be employed to put out burning fuel, extinguish ship fires, and disperse oil absorbers in operations to remove oil film from water surface.
The Be-200 SAR version is designed for visual and instrumental search, rescue and evacuation of casualties in areas of man-made and natural disasters. This version is fitted with maritime search and surveillance equipment. The aircraft is capable of transporting up to 50 rescue troops, or up to 60 seated casualties, or up to 30 stretcher casualties.
The Be-200 transport version is capable of transporting up to 7.5 tonnes of cargo. The cargo hold is fitted with all the necessary equipment for transporting cargoes in bulk or on standard pallets. The crew can convert the aircraft into a passenger version within one hour. Depending on the passenger cabin configuration, the aircraft is capable of transporting 32 to 64 passengers.
The Be-200 passenger/cargo version is capable of simultaneously transporting 19 passengers and up to 3,000 kg of cargo. The administrative version can transport 18 to 24 passengers.