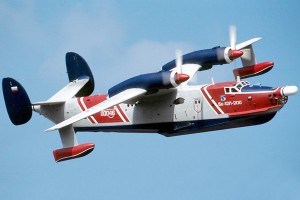 DESCRIPTION: The Be-12P-200 is a fire-fighting amphibian powered by two AI-20D turboprops 5,180 horsepower each – a civilian version of the Be-12 ASW aircraft whose maiden flight took place on 18 October, 1960. All in all, from 1963 to 1973 the Taganrog-based aircraft production plant manufactured a total of 140 Be-12 ASW amphibians that had been operated for a long time by the Soviet (and later Russian and Ukrainian) NavalAviation as well as naval aviation of some other countries. Following the beginning of en masse Be-12 decommissioning, a programme was launched to convert the aircraft with a sizeable remaining service life into commercial versions for civilian operators. The variants derived were the Be-12NKh transport and multipurpose amphibians (1992) and Be-12P fire-fighting aircraft (1992). The latter was used for deriving the Be-12P-200 fire-fighting aircraft fitted with a set of relevant equipment designed to be mounted on the new amphibian – Be-200. The maiden flight of the Be-12P-200 took place in August 1996.