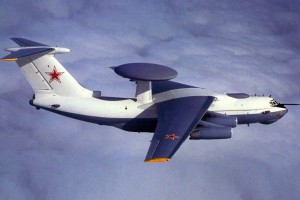 DESCRIPTION: An airborne early warning and control (AEW&C) aircraft equipped with the Shmel radar system and four D-30KP 12,000-kgf engines. It was derived by Beriev from the Il-76MD transport. Its maiden flight was made on 19 December, 1978. The Tashkent Aircraft Production Corporation (TAPC) produced about 20 such aircraft which are in service with the Russian Air Force. In 1999 the A-50I prototype was built on the basis of A-50 at Beriev for potential foreign customer. Israeli radar airborne warning system was supposed to be installed on the aircraft. A-50I made its first flight on 28 July 1999, however, later the programme was suspended. Later on development of A-50E export version was started.