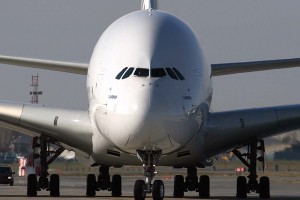 COSTS: Estimated development cost US$10.7 billion for whole A380 family given during June 2001; of which US$3.1 billion was sought from risk-sharing partners. Projected unit cost at launch was US$217 million for passenger version and US$233 million for freighter; revised to average unit price for A380-800 of US$265 million by mid-2002.

ACCOMMODATION: Flight deck crew of two; rest areas are provided for crew in flight deck area; see Design Features for details of passenger cabins. Five main deck and three upper deck emergency exits on each side of fuselage; Goodrich evacuation slides, those for upper decks stored within the airframe rather than the door. Seat pitches: first class 173 cm (68 in), business class 122 cm (48 in), economy class 81 or 84 cm (32 or 33 in).