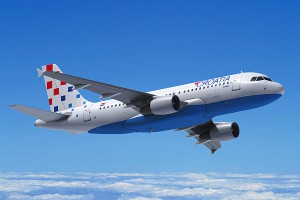 Airbus announced in 2000 that production of the ACJ would be restricted to four per year until 2003; this was increased to six, due to demand. By mid-2002, six companies were recommended for outfitting; Lufthansa Technik, Hamburg; Jet Aviation, Basle; Air France Industries, Toulouse; Ozark Aircraft Systeras. Bentonville. Arkansas; and EADS Sogerma, Toulouse.

A319LR: Long-range variant of ACJ. Second aircraft for Qatar Airways (two-class layout for 110 passengers) is to this standard; entered service August 2003. Three more ordered by 30 September 2003: two for PrivatAir via CIT (48-seat all business class cabin) and one undisclosed.

A319 Executive: Variant of ACJ. Three ordered by 30 September 2003; two for PrivatAir via CIT and one for Blue Moon Aviation (USA) via SALE.

COSTS: Total development cost estimated at US$275 million, entirely financed by Airbus Industrie. A319-100 cost approximately US$48.7 million depending on choice of engines and level of customisation (2001); ACJ cost US$36 million (2001), excluding outfitting of between US$4 million and US$10 million.

STRUCTURE: AS A320. Assembled in Germany by EADS Deutschland Airbus, alongside the stretched A321; partner workshares rearranged to maintain overall workshare balance between France and Germany.