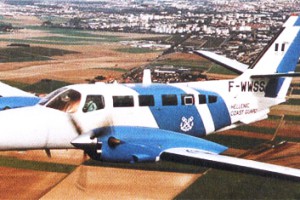 Vigilant Polmar III: As Polmar II, but based on F406 Mark II airframe. One ordered by French Customs in 2001 for delivery in 2004.

Vigilant Surmar: Surveillance (maritime) version with 360" radar, such as Texas Instruments AN/APS-134 or Telephonies AN/ APS-143 and optional equipment including Litton night vision system. In 1996 Reims developed undenving hardpomts for the F406 which enable it to carry light weapons such as machine gun pods or rocket launchers, or camera pods or SAR liferafts.

Vigilant Comint/lmint: Dedicated communications jnd imaging intelligence version of Ihe Caravan II, developed jointly with Thomson-CSF Communications, first shown at Paris '97- Equipped with Thomson TCC SAS airborne Flint system, an operator's console with MS Windows NT-based workstation and an array of directionfinding antennas housed in a ventral radome. Is also first Vigilant with a pair of undcrwing pylons for carriage of stores which can include gun or rocket pods and airdroppable SAR equipment

French Customs Service received 10 in Surmar and two in Polmar 1/11 configuration One in Polmar III configuration (No 90), ordered in late 2000 and intended for delivery in 2002 but delayed until first quarter 2004. First Surmar (No. 74. although registered as a Vigilant) handed over 11 January 1995. followed by No* 75 find 77 on 12 September 1995. the latter two replacing Cessna 404s in Martinique, French Antilles; National Jet Systems Australia ordered three Vigilant.1, for deliver) carry 1996 for Surveillance Australia programme (aircraft Nos 76.78 and 79) and Scottish Fisheries has tour Vigilanfs for fisheries patrol, the latest delivered in April 1998.

Recent customers for the F406 include the Republic of Korea Navy, which ordered five in target tug configuration, the first delivered on 23 November 1998 and the last in mid-June 1999. total contract value bang US$74 million (1997). and the Hellenic Ministry of Merchant Marine, which, in June 1999. ordered two for delivery in late 2000 as Surpolmar variants and additional one in November 1999; the hrsl Surpolmar (FWWSS/AC 21) for this contract made its maiden flight on 21 August 20IX) and was delivered on 27 March 2001. remaining two received by December 2001. at which time a fourth was under negotiation One to Air Saml Pierre in mid-2003, fined with TCAS n. Total 92 sold by June 2002 (excluding prototype). An agreement with the Brazilian government signed in April 1998 provides lor the purchase of three aircraft in multisensor configurations. Daihyaku Shop of Japan ordered one F406 Mark II during 2000. for deliver) m mid-20fW and operation by an undisclosed local customer.

ACCOMMODATION: Crew of two and up to 12 passengers, in pairs facing forward, with centre aisle, except at rear of cabin in 12/14-seat versions. Alternative basic configurations for six VIP passengers in reclining seats in business version, and for operation in mixed passenger/ freight role. Business version has partition between cabin and flight deck, and lavatory on starboard side at rear. Split main door immediately aft of wing, on port side, with built-in airstair in downward-hinged lower portion. Optional cargo door forward of this door to provide single large opening. Overwing emergency exit on each side. Passenger seats removable tor cargo carrying, or tor conversion to ambulance, air photography, maritime surveillance and other specialised roles. Baggage compartments in nose, with three doors, at rear of cabin and in rear of each engine nacelle. Ventral cargo pod optional.