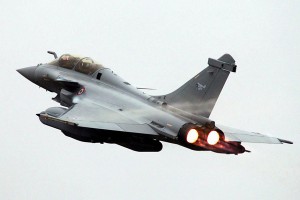 CUSTOMERS: Anticipated worldwide market for 500 aircraft in addition to originally planned 250 for French Air Force (225 Cs and 25 Bs) and 86 for French Navy; former service announced revised requirement for 234, comprising 95 Rafale Cs and 139 two-seat (pilot and WSO) combat versions, in 1992. Defence economies in 1996 included reduction of requirements to 60 Ms and Ns .
Naval deliveries began with No.2 to CEPA trials unit on 19 July 2000, followed by No.3 in September 2000; service familiarisation began 4 December 2000 when Nos. 2 and 3 delivered to Landivisiau naval air base; Landivisiau's 12 Flottille re-formed 18 May 2001 with four aircraft; first operational voyage began aboard Charles de Gaulle (commissioned 1999) on 1 December 2001, and Nos. 2 to 8 had embarked by 10 March 2002, when stationed in Arabian Gulf; Nos. 9 and 10 received mid-2002 and IOC then declared.
Balance of naval order replaces Super Etendards, 11 Flottille being first recipient, in 2005; third squadron to follow. Navy received 10 aircraft in Fl configuration (actually LF1, which upgraded to partial Fl in early 2002, incorporating some air-to-air capability, although full Fl , with cannon and MICA AAM, not due until late 2002) 15 F2s and 35 F3s, last in 2012, all to be based at Landivisiau.
Air Force deliveries originally planned for 1996-2009, including first 20 in interim configuration; two year postponement announced 1992; further slips in development funding delayed first receipts to 2002 and IOC to 2006, when first squadron to be established with 20 Rafale Bs. Only Air Force's first three aircraft 301, 302 and 101 (two Bs and one C) to Fl standard.
Official authorisation to launch production given 23 December 1992. Initial production contract in 1993 defence budget (formally awarded 26 March 1993), comprising one aircraft each for Air Force and Navy. Total 13 by 1996, while 1997-2002 plan envisaged 33 B/Cs and 15 naval versions (total 48) to be ordered (and two Bs and 12 Ms delivered), followed by orders for 15 B/Cs per year from 2003. In early 1997, French defence procurement agency, DGA, agreed with Dassault a multiyear procurement of the 48 aircraft in return for a 10 per cent cost reduction, but this later suspended. Authorisation to order the first 13 Rafales was only granted in May 1997, however. At the same time, separate plans were being formulated for acceleration into service of the first 10 air force Rafales to equip an export-promoting and operational trials (half) squadron, but those plans also soon abandoned. Eventually, go-ahead given on 14 January 1999 for 48 aircraft, including 20 options, these confirmed on 21 December 2001. Deliveries in 2003-08 five-year plan will be 57 to Air Force and 19 to Navy. Export versions of naval variant were available to potential customers from 1999 onwards. China expressed interest in 1996-97. By 2015 French Air Force combat arm is expected to comprise 140 Rafales in front-line units.

STRUCTURE: Most of wing components made of carbon fibre including elevons; slats in titanium; wingroot and tip fairings Kevlar; canard made mainly by superplastic forming and diffusion bonding of titanium; fuselage 50 per cent carbon fibre; fuselage side skins of aluminium-lithium alloy; wheel and engine doors carbon fibre; fin made primarily of carbon fibre with aluminium honeycomb core in rudder. Composites account for 25 per cent by weight of structure and 20 per cent of surface area; weight saving directly attributable to composites is 300 kg (661 lb) - equivalent to a 1 tonne reduction in empty weight.