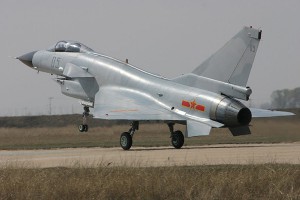 PROGRAMME: Reports of the existence of this new Chinese fighter began to emerge in October 1994, following the detection by a US intelligence satellite of a prototype at Chengdu. Said to be in the weight and performance class of the Eurofighter Typhoon and Dassault Rafale, the J-10 bears a close external resemblance to the cancelled IAI Lavi, despite Israeli government statements that fears of unauthorised technology transfer are unfounded. A photograph, released in 1996 by the People's Liberation Army, of a wind tunnel model of the J-10 showed it to be outwardly identical to the Lavi in all essential respects, apart from slightly raised foreplanes and the addition of wingroot trailing-edge extensions.
This was confirmed in January 2001 when an unauthorised source posted a photograph of prototype 1001 on the Worldwide Web (although it was rapidly removed). The photograph showed the artist's impression first published in the 1997-98 Jane's to be accurate in all respects, except that it was larger, and fin chord was some 20 per cent greater from root to tip.
It now appears that go-ahead for what became the J-10 was given in September 1988, development by No. 611 Research Institute beginning in the following month. An all-metal mockup was completed by late 1993, but poor performance predictions, coupled with a requirement change from air superiority to multirole, caused some redesign and consequent delays in the programme.
In late 1995, Russian sources indicated that the first flight, then expected during the early part of 1996, would be powered by a single AL-31FN turbofan; first prototype 1001 is now thought to have achieved this milestone in mid-1996. Russian avionics manufacturer Phazotron offered its Zhuk (Beetle) radar (already selected for the F-8 IIM upgrade programme) and the more capable Zhemchug (Pearls) and RP-35 as alternatives to the Elta EL/M-2035 or a derivative.
In late 1997, the slightly modified prototype 1002 was lost in a fatal accident. Two further prototypes (1003 and 1004) had been completed, and designation J-10 bestowed, during that year: the officially announced 'first' flight date of 23 March 1998 apparently referred to resumption of flight testing by one of these aircraft. According to China-based sources, 10 AL-31FN engines had been imported by end 1997 and four J-10 prototypes completed. An unofficial CAC source in mid-1999 stated that two prototypes (evidently 1001 and 1003) were then flying, with four others undergoing static test, still being assembled or only just completed; of these, 1004 and/or 1005 may have been static/fatigue test aircraft. Chinese sources at Zhuhai in November 2000 stated that between five and eight J-10s then built and more than 140 test flights made; nine aircraft identified by mid-2002, of which 1007 to 1009 may be preproduction or initial production aircraft, one of which reportedly having made a 'first' flight on 28 June 2002. Service entry should be in about 2005 and some may be deployed in the two aircraft carriers that are due to be built by then. Meanwhile, unconfirmed reports in late 2002/early 2003 indicated that 10 J-10s had been deployed with the Nanjing Military Region in August 2002 for operational evaluation or familiarisation training; and that manufacture of the first two two-seat (J-10B?) examples would begin in 2003 and would have enhanced air-to-ground and maritime attack capability.
The J-10 failed to make its widely predicted public debut at Zhuhai in November 2002, but it emerged shortly after the show that CAC and the No. 611 Institute had completed conceptual design work on two advanced variants of the J-10: one single- and one twin-engined, both having twin vertical tailfins and embodying stealth characteristics. Both also featured a redesigned and more angular nose section. It has also been noted that in 2002 the China People's Daily referred to the J-10 as Qian Shi (Attack 10), rather than the Jian (Fighter) title that might have been expected. This appears to support the suggestion in some quarters that the aircraft is viewed as a J-7/Q-5 replacement rather than a rival to the Su-27/J-11 to replace the Shenyang J-8.

CUSTOMERS: Reports have suggested a PLAAF requirement for up to 300, but achievement of this may depend upon China's progress with licensed manufacture of the Sukhoi Su-27 (see entry for Shenyang (SAC) J-11).

ARMAMENT: Recently released photographs indicate 11 external stores points, including one on centreline, tandem pairs on fuselage sides and three under each wing, the outboard wing stations each carrying PL-8 (Python 3) or later AAMs such as PL-11 or PL-12. Other potential weapons could include Vympel R-73 and R-77 AAMs; C-801 or C-802 ASMs; YJ-8K (anti-ship) or YJ-9 (anti-radiation) missiles; and laser-guided or free-fall bombs. Internally mounted 23 mm cannon on port side of nosewheel; provision for a Chinese-developed IR/laser navigation and targeting pod.